Home›Features›Trading History›Trader Homework: A History of the British Pound (Part 1)

Trader Homework: A History of the British Pound (Part 1)

Our Trader Homework series provides key trading theory, history and analysis for traders to swot up on in their spare time. First up, FX Trader Yvan Berthoux provides a recap on the history of the British Pound.

According to the yearly BIS Foreign Exchange Turnover published in April 2016, the British Pound is part of the G10 currencies and is the fourth most ‘traded’ currency with a daily average of 649 billion Dollars. Its percentage share of average daily turnover stands at 12.8%, and its two main ‘counterparties’ are the US Dollar ($470bn) and the Euro ($100bn).

Note that the exchange rate $/£ [or USD/GBP] is also called Cable, a term that derives from the advent of the telegraph in the mid-1800s. Transactions between the British Pound and the US Dollar were executed via a Transatlantic Cable, and the first exchange rate was published in The Times on August 10th 1866.

This article will be split in two parts; the first one [briefly] retraces the origin and the history of Sterling until the End of the Bretton Woods system in 1971, and the second part explains the trends and reversals of Cable in addition to stating what I believe were the main drivers of the currency pair (from 1971 to today).

PART I. Origin and History of the Sterling Pound between the mid-700s and the end of the Bretton Woods system (1971)

Considered to be the oldest living currency in the world, the Pound is 1,200 years old and was born in the latter half of the 8th Century, when silver pennies were the main currency in the Anglo-Saxon Kingdoms. The name [Sterling] Pound (or Livre sterling in French) comes from the Latin word Libra Pondo, which means pound weight.

Back in the 8th century, 240 silver pennies represented one pound of weight and it was not until 1489 (under Henry VII) that appeared higher denominated coins with the first Pound coin. Then, paper notes began to circulate after the establishment of the Bank of England in 1694, the world’s second oldest central bank (after the Sveriges Riksbank, the Swedish central bank). The Bank of England started as a ‘private company’ with the immediate purpose of raising funds for King William III’s war against France (issuing notes in return for deposits).

Even though there is an infinite amount of [inspiring] work on the Bank of England and the British currency, I am going to move directly to the 19th century when the British Pound became the world’s reserve currency for a century after the Napoleon’s defeat at Waterloo in June 1815 (Foreign Exchange Reserves, Image 1). 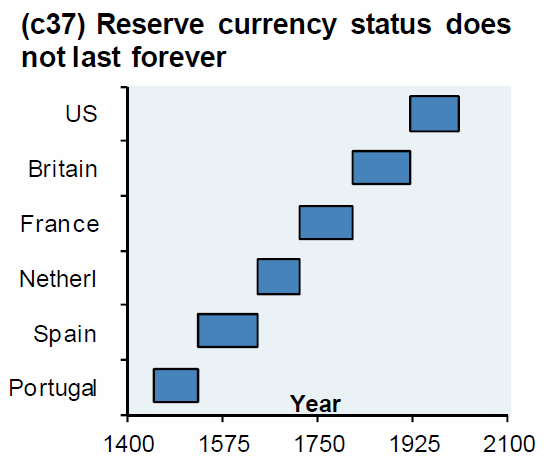 Great Britain arose as the leading exporter of manufactured goods and services and the largest importer of food and industrial raw materials. Between the mid-1800s and the outbreak of WWI in 1914, 60 percent of the global trade was invoices and settled in British pound (B. Eichengreen, 2005).

London became the world’s financial capital in the late 19th century and the export of capital was a major based for the British economy until 1914. As foreign governments were seeking to borrow in sterling, British financial institutions established branches in the colonies and colonial banks opened offices in London. In 1913, Sterling’s share in the Official Foreign Exchange Assets stood at 48%, above Francs (31%) and Marks (15%) according to Lindert’s calculation (1969).

B. WWI outbreak and its consequence on the UK (and Sterling)

Although the US economy surpassed the British economy in size [in real terms] in 1872 (Gheary-Kamis, 1990), the important switch occurred in the early 1910s:

At the outbreak of WWI, the gold standard was suspended and restrictions were placed on the export of gold, which obviously had a negative impact on the British pound (vis-à-vis the US Dollar) as we can see it on Chart 2a. Prior to and during most of the 19th century, one pound was roughly worth 5 US Dollar (Chart 2b), with some ‘turbulence’ in 1860s due to the American Civil War. 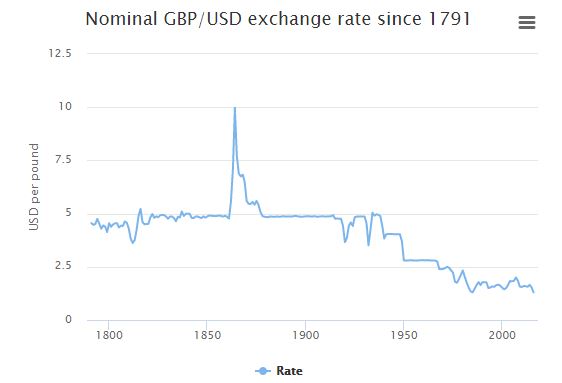 Chart 2b. Cable historical rate since 1791 CLICK TO ENLARGE

Severe inflation (20%+), lack of demand, a high unemployment rate (above 10%) in addition to a 25-percent drop in economic output between 1918 and 1921 launched the Great Depression in United Kingdom at the end of WWI, which last for two decades. The Pound first plummeted from $4.70 to $3.50 during that 3-year period before swinging back to its prewar levels (at $4.87).

C. ‘In between’ the Two Wars

The Pound ‘rebound’ in the early 1920s (Chart 2a) could be explained by the political desire to maintain the value of Sterling at a ‘high’ rate (i.e. prewar levels) to give Britain an [economic] successful image to the rest of the World. In order achieve that, the UK had to run contractionary fiscal and monetary policy (Image 2a), which increased interest rate differentials (i.e. attracted savings in Britain) and pushed the UK inflation rate below the US one. As the US inflation rate was already very low at that time, the UK was experiencing deflation at that time (Image 2b). 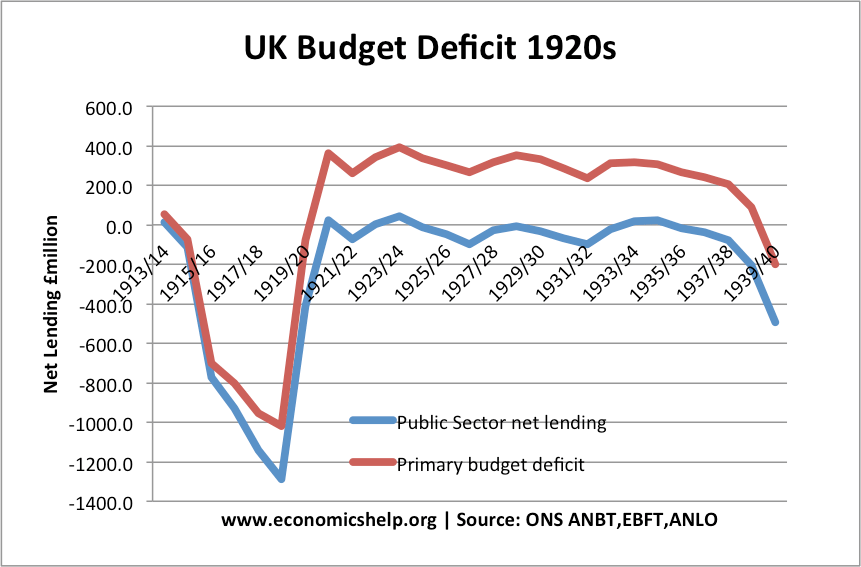 Image 2a. UK Budget deficit in the 1920s (Source: ONS) CLICK TO ENLARGE 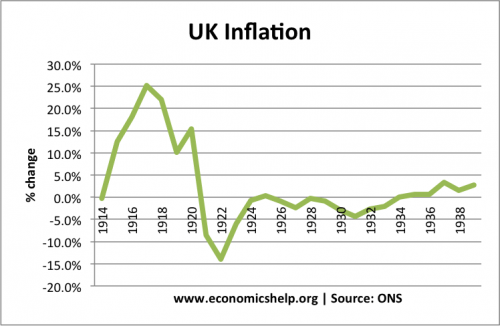 Image 2b. UK Inflation Rate in the 1920s (Source: ONS) CLICK TO ENLARGE 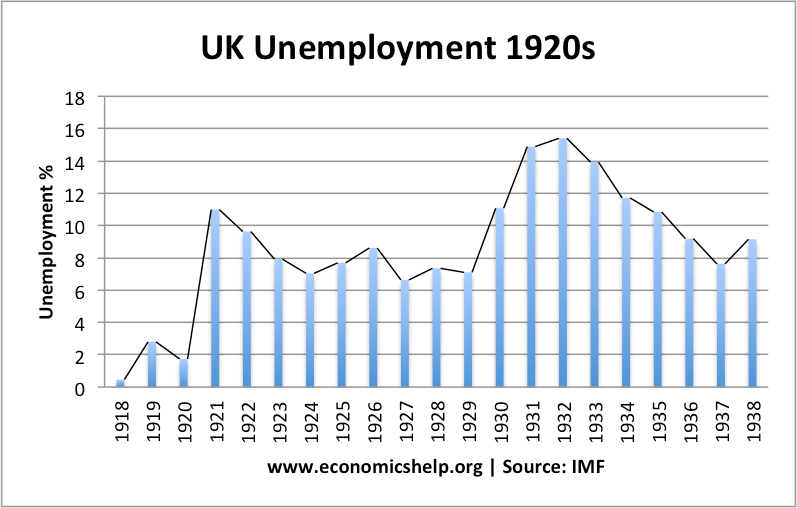 Then, in 1925, Britain re-adopted a form of Gold Standard where the exchange rate was determined by the relative values of gold in the two countries, with a fixing at 4.86 US Dollar per unit of Pound. This Gold Standard ‘return’ was considered to be disastrous (Churchill’s biggest mistake as he was serving as the Chancellor of the Exchequer at that time), as it resulted in persistent deflation, high unemployment rate that led to the General Miners’ Strike of 1926.

The UK was stuck in the debt vicious spiral; running a contractionary fiscal and monetary policy during a deflationary recession was increasing both the amount of UK debt in real terms and its burden (high interest rate increased the cost of borrowing). This led to a Balance of Payments issue, and led to a run on the Pound. On the top of that, the Wall Street Crash and the beginning of the Great Depression put the British economy under intense pressure, which eventually came off the Gold Standard in September of 1931. In the year that followed, the British Pound dropped to lower lows to around 3.25 against the US Dollar.

However, as Barry Eichengreen noted in his paper Fetters of Gold and Paper, countries that came off the Gold Standard early (i.e. UK) did better [or less worse] than the countries that remained on it for longer (i.e. US). After a 3-year [1930-1932] pronounced deflationary period in the US (Image 3), rapidly rising prices in the summer of 1933 (after the US went eventually off the gold standard on June 5th 1933) eased the ‘strain’ on other countries and kicked off the dollar depreciation.

The British Pound rapidly recovered its losses and surged to a new high of $5 by 1934 (Chart 2a). The Pound remained afloat and oscillated at around $5 until 1939 and the outbreak of WWII. This depreciation (which brought back the British Pound to its low of 3.25 against the greenback) was mainly due to uncertainty around the outcome of the war, as fundamentals were expected to deteriorate very quickly (output collapse, a rise in inflation) indebting the British economy even more. 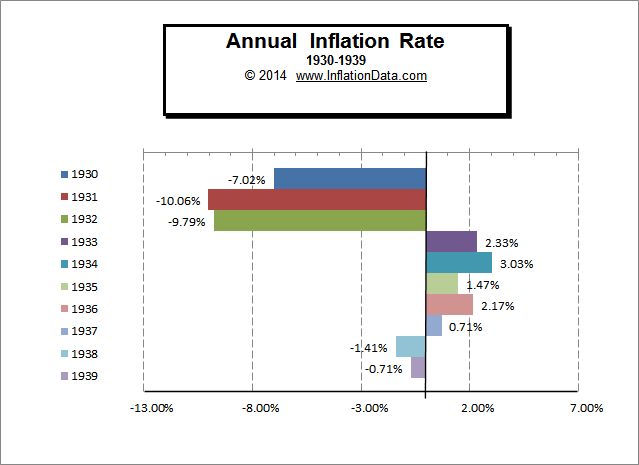 In 1940, an agreement between the US and UK pegged the Pound to the greenback at a rate of $4.03 per unit of Pound. This exchange rate remained fixed during WWII and was maintained at the start of the Bretton Woods system (Chart 2a). Britain emerged from WWII with an unprecedented debt of nearly 250 percent as a share of GDP (most of it owned to the US) with ‘strong’ currency, a [much] less dominant market in terms of competitiveness and a degrading balance of payments (Hirsch, 1965).

Despite the soft-loan agreement (a 3.75 billion-dollar loan to the UK by the US negotiated by JM Keynes at a low 2% interest rate with repayment over fifty years) to support British overseas expenditure post WWII, the British Pound remained under intense pressure. Chancellor of the Exchequer Sir Stafford Cripps eventually announced a 30-percent Pound devaluation from $4.03 to $2.80 in September 1949.

However, the devaluation was not enough as the following two decades were characterised by persistent balance of payment problems and led to the Sterling crisis of 1964-1967. The UK was forced to seek assistance from the Bank of International Settlement and the IMF more than once.

Despite persistent current account deficits and a deteriorating balance of payments in 1964-1965 (Image 4), UK officials didn’t react (i.e. devalue) as they argued that devaluation would severely strain Britain’s relations with other countries when the main holders of sterling would begin to withdraw their balances from London and also threaten the international monetary system (Bordo & al., 2009).

The Pound weakness persisted in 1966 and 1967, covered by lines of credit received by other central banks (i.e. swaps with the NY Fed) and the IMF. But the government eventually ceded and PM Harold Wilson announced that the Pound would be devalued from $2.80 to $2.40 on Saturday 18 November 1967. It then remained at that level until end of Bretton Woods.

Trader Homework: A History of the British Pound (Part 2)

Yvan Berthoux is an FX Trader based in London. You can read more of his analysis at yvanberthoux.wordpress.com 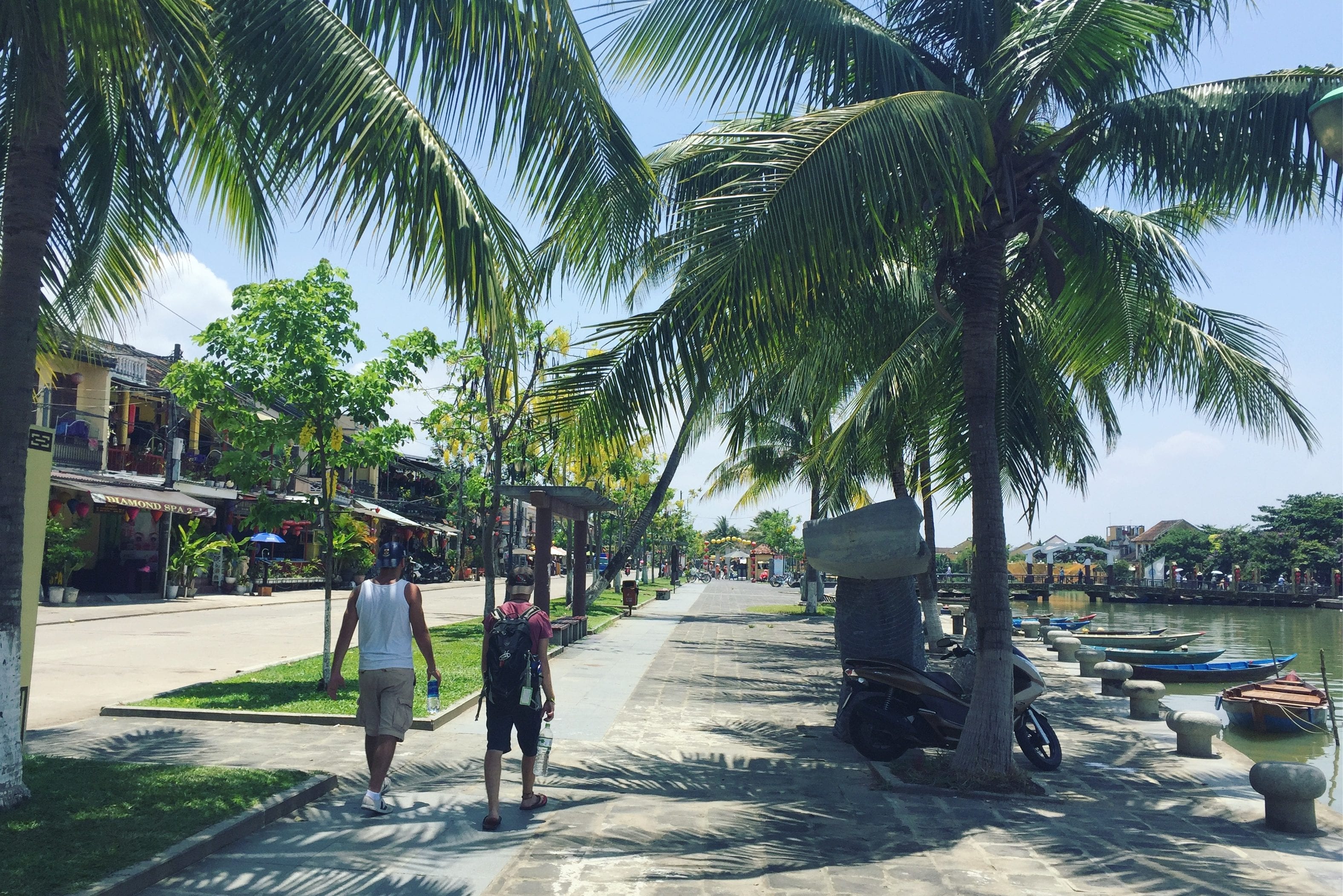 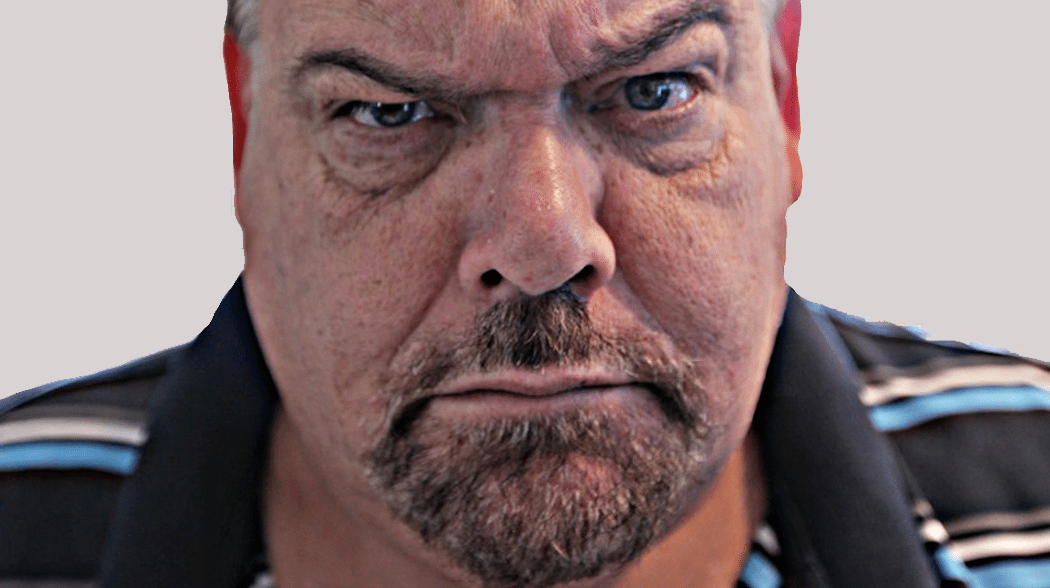